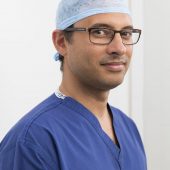 Creatine is a nutritional and sports supplement. Like whey protein, creatine is designed to increase muscle mass and strength [1]. So it’s popular with athletes to enhance performance in a safe, legal way.

Despite its popularity — the creatine market is predicted to be worth $458 million in the next 5 years — rumours persist that creatine is responsible for hair loss [2].

So does creatine cause hair loss?

Creatine is a chemical naturally produced by the body. Produced primarily by the liver and kidneys, its main function is to give you energy when undertaking difficult or high-intensity exercise. Red meat and fish are also good sources of creatine.

But following its use by Olympic athletes like Linford Christie and Sally Gunnell 30 years ago, more people have begun using creatine supplements to boost athletic performance [3]. Creatine supplements give you more energy, allowing you to exercise longer without becoming tired.

There is some anecdotal evidence to suggest a link between creatine and hair loss — but does the research back this up?

Creatine and hair loss: is there a link?

Creatine has been linked with hair loss since 2009, when the results of a small-scale research study were published. Researchers found that creatine use in a small group of college-age rugby players led to an increase in DHT [4]. DHT — or dihydrotestosterone — is the hormone responsible for male pattern baldness.

The study found a DHT increase of 56% following three weeks of creatine use. This led to speculation that hair loss may ensue. Researchers stopped observing the rugby players after the three weeks, and it’s unlikely that noticeable hair loss would have occurred during this short period. So it’s impossible to determine if these raised DHT levels actually contributed to hair loss in this instance.

The effects of DHT on hair loss

DHT is a product of testosterone metabolism that occurs in both men and women, although men produce substantially more DHT than women. This explains why men are more susceptible to pattern baldness.

DHT binds to hormone receptors in the hair follicles. This causes them to stop producing hair, disrupting the growth cycle and leading to visible hair loss. Genetics also play a big part in the impact of DHT on your hair. So for most people, hair loss is simply down to luck.

It’s not a given that more DHT means more substantial hair loss. Research suggests that the body’s sensitivity to this hormone plays a bigger role than the actual amount of DHT in the body [5]. So although there may be a link between creatine and higher levels of DHT, it’s not necessarily an indirect cause of hair loss.

What to do if you’re worried about hair loss

While there’s a tenuous link between creatine and high DHT levels, there’s little evidence to suggest that creatine causes hair loss. So if you take creatine supplements, you don’t need to worry about its effect on your hairline.

However, there are many other factors that may be causing you to lose hair. Male pattern baldness affects around 16% of men under the age of 30, and 53% of 40-49 year olds [7]. Anxiety can also cause hair loss, which may lead you to seek out how to regain hair after stress. Restricted diets have also been linked with excessive shedding — anorexia nervosa can cause hair loss, as can weight loss. Learn how to prevent hair loss during weight loss.

If you’re losing your hair, you need to find out what’s causing it. Book a free consultation with a trichologist to determine the cause of your hair loss and create a personalised hair loss treatment plan.