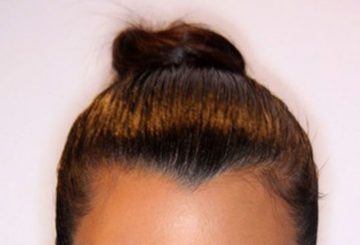 As much as we may try, it’s often difficult to have complete control over our hairlines. Whether your hairline is receding, or in a widow’s peak shape, it can lead to feelings of insecurity and negative body image.

Having a widow’s peak is a common hairline that appears as a downwards V-shape at the centre of your forehead. For some people, it can be very obvious and for others very subtle.

If you want to learn more about widow’s peaks and what causes them, keep on reading.

What is a widow’s peak?

A widow’s peak is a V-shaped hairline that most commonly runs in families. It’s a genetic trait that gets passed down in the same way as curly hair would.

The name ‘widow’s peak’ is thought to have come from old 18th-century English traditions where women were expected to wear a black triangle hat or hood after their husband died.

What causes a widow’s peak?

Unlike male pattern baldness, which is thought to affect up to 80% of men during their lifetime, widow’s peaks are much less common and their cause all lies in genetics.

Normally, if someone in your family has a widow’s peak, there’s a high chance that it can be passed on through the generations. However, there isn’t a lot of research in the film that can pin down a specific gene that causes this type of hairline.

However, the prevalence of widow’s peaks can vary greatly depending on the study. For example, in some studies, widow’s peak prevalence has been as high as 81% [3]. Similarly, in a study in India, widow’s peaks were found in 46.15% of male and 49.35% of female individuals, suggesting there is no significant gender bias [4]. This outcome was also recreated in a study of young adults in Nigeria where 15.45% of males and 16.36% of women had widow’s peaks [5].

A widow’s peak is thought to be caused by multiple genes, so it can be hard to predict for certain when someone will or won’t develop this type of hairline.

However, a widow’s peak can also be associated with a number of genetic conditions, like:

How to get rid of your widow’s peak?

If you’re particularly bothered about your widow’s peak, it is quite easy to get rid of using different hair removal products.

Although you may not be able to prevent hair growth completely, hair loss treatments can provide an efficient solution – but it is something that you will have to continue using when hair grows back.

Here are some of your options:

Is a widow’s peak the same as a receding hairline?

Although a receding hair line is an indication that you’re suffering from male or female pattern baldness, you don’t need to be as concerned if you have a widow’s peak – the two things are not related.

A receding hairline can sometimes take the appearance of a widow’s peak, however, having one of these hairlines itself is not a sign that you will be going bald any time soon. Even children have widow’s peak so there’s no need to worry about going bald.

However, if you weren’t born with a widow’s peak and you’re noticing that this shape is starting to appear as your hairline recedes, it could be a sign that you’re starting to go bald.

What can I do if I am going bald?

If you’re worried about your widow’s peak continuing into baldness, there are plenty of options that are open to you.

From oral tablets, such as Finasteride and Dutasteride, to topical treatments such as Minoxidil which you can apply like a serum to your scalp, there’s a lot of research that suggests that these treatments can be effective for a large proportion of people.

If you want to take it one step further and invest in a long-lasting treatment for hair loss, you may want to consider getting a hair transplant for your widow’s peak.

If you’re thinking about whether a hair transplant could be for you, we’d love to talk you through the whole process and answer any questions that you may have.

In this article, we’ve taken you through what a widow’s peak is and why it is caused. This type of hairline is more common than you would think but it all comes down to genetics.

Many people have a widow’s peak and it’s your choice whether you want to cover it up or embrace it. But, one thing you don’t need to do is be concerned that it’s an early sign of going bald in later life.

If you’d like to learn more about hairlines, hair loss and everything in between, keep up to date with our Wimpole Clinic blog.